It was such a joy to be around such absolutely kick-ass females at this edition of Fragmenta. Donning different Madonna t-shirts from various tours and the kind of self-assured, no-nonsense presence that tends to come with being on this planet for a while, Kay Turner (New York, USA), Paula Schorr and Karen Siegel (Highland Park, New Jersey, USA) assisted by Mary Sanger (Austin, Texas USA) provided the exact image of what I want to be when I grow up.

Kay spoke about her work, about goddesses and altars, about the figure of the witch. More females are identifying with the characteristics and values of the witch: standing up for social justice, putting her foot down, saying no, speaking out, not being taken for a ride. Of course, these are all problematic traits for those who wish to get away with murder and the witch has been demonized and downtrodden over time. The more acceptable angelic, silent, fertile goddess being favoured and lauded by the establishment.

Whooshing around on her absolutely massive and beautiful broom (the perfect vehicle for getting out of a sticky situation), Kay created the possibility for an update of the witch persona. She’s loud, she’s wickedly funny, she smashes patriarchy’s knickknacks with a hammer as she sings in celebration.

The witch is queer. With Kay reading Grimm’s Frau Trude tale about the little girl and the witch who turned her into a block of wood, Paula and Karen continue with their amazing performance, singing about the old witch and the young gay girl who crosses the threshold thirsty to learn about the arts of seduction.

Paula and Karen’s performance ‘Playing with Fire’ from a few years back at NYU.

Enlivened by the singing and smashing we stand up and gather for the procession through the temples. With Kay at the helm we make a run on our brooms laughing gleefully as we whoosh forward. We eventually meet the goddesses on our journey. 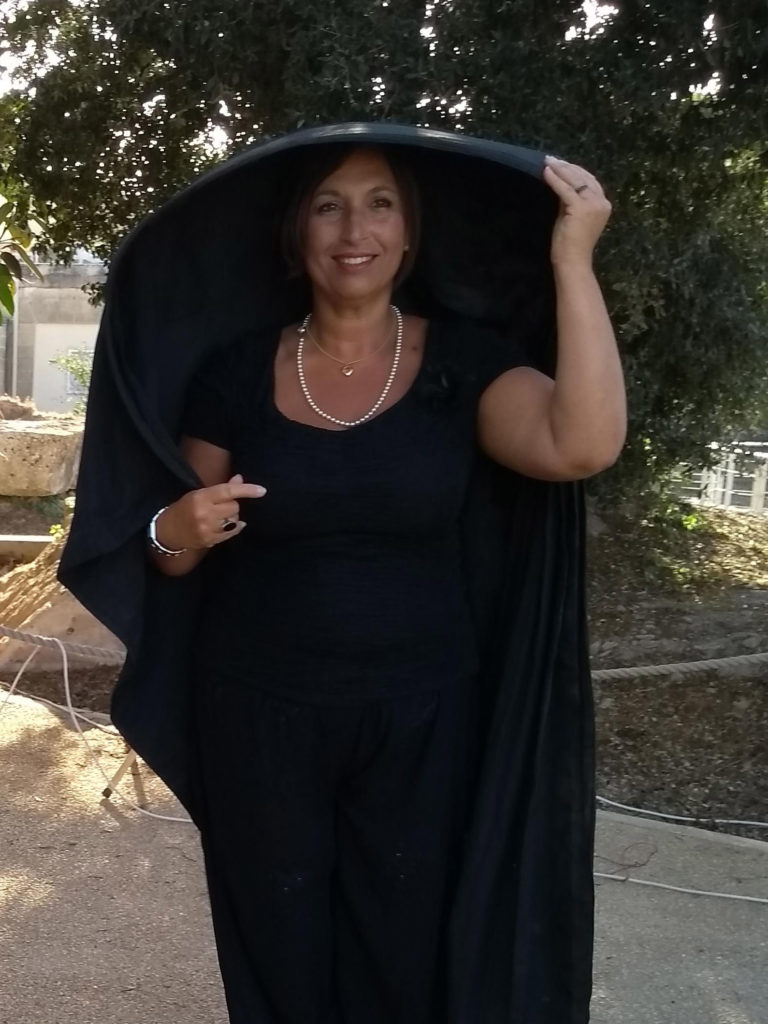 Dressed in black with a traditional Ghonnella and a string of pearls, the Maltese woman is seen waving in a friendly manner. She waves, she moves, she waves some more, silent, smiling, beautiful. Is this what we recognize as the ideal? 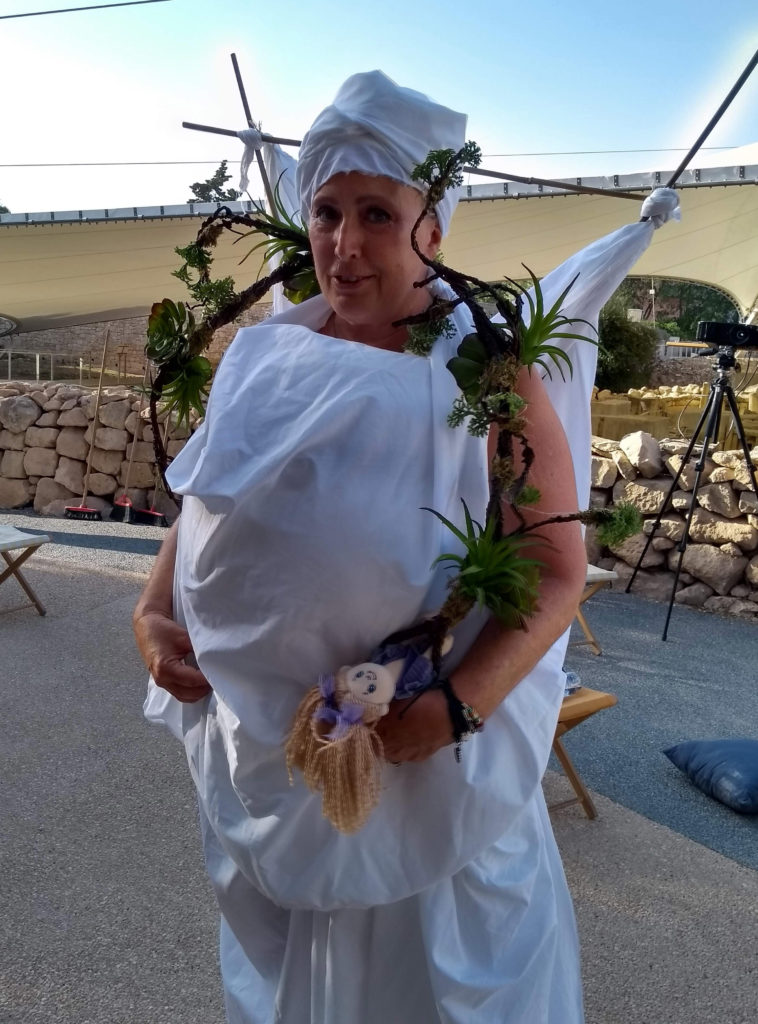 Sansuna is the builder of Ggantija. She lives on broad beans and honey as she kicks massive stones up the hill, her hands occupied with the baby she had with a human. At Tarxien she was offering passers-by broad beans to place on the main altar.

The Witch with the crooked nose

Sporting a very respectable long and pointy noise, the witch cackles as we walk past. Is she righteous, is she evil, is she beautiful, is she ugly? Who is she for us?

Traditionally known to sit on humans at night and cause sleep paralysis. Sleeping with a knife under the pillow is said to keep her away. Here the Night Hag is seen snapping knives in two and offering them to passers by. What if we invite her to visit? What gifts does she bring? 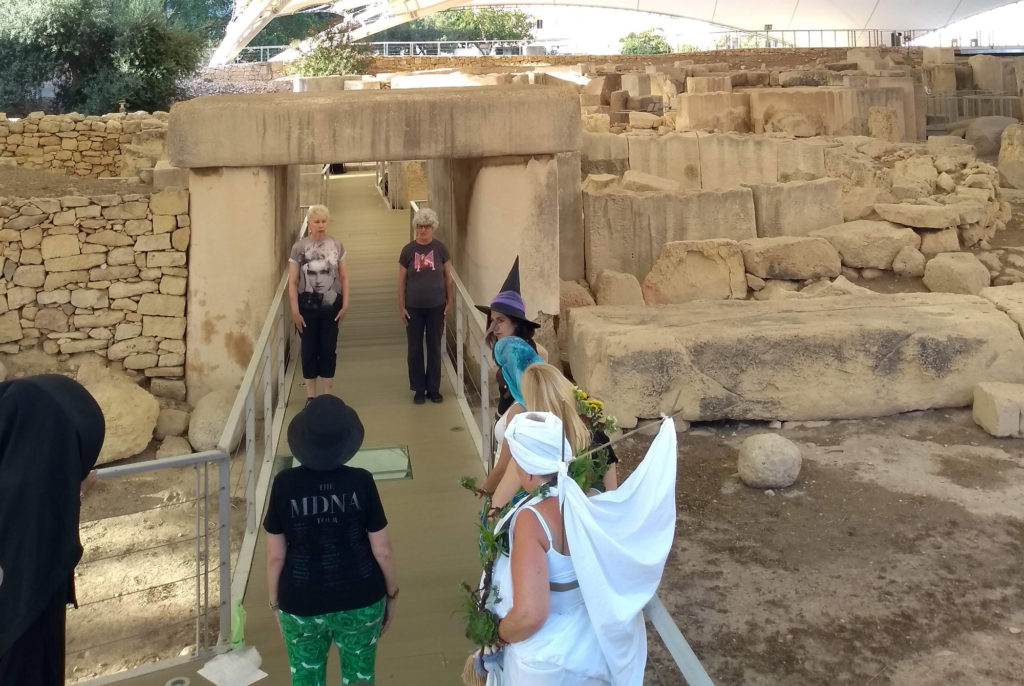 At the entrance to the inner temple, Paula and Karen stand at the monumental stones. We watch them re-enact goddess protection mudras and copy their gestures before walking in, greeted by more goddesses.

Dressed in white, veiled in blue and carrying a mini-me glow-in-the-dark Madonna, the virgin has stars in her hands that she passes on to people as they walk by. The stars are made out of religious pages turned into confetti for the Immaculate Conception feast celebrated a day previously.

The Witch and the Goddess

Back out of the temple we walk up to the altar built for the occasion, decorated with scarves, goddesses, offerings, flowers and flickering lights. We add the offerings we collected during the procession – broad beans, flowers and stars.

Kay, Paula and Karen gather for one last invocation, putting the power of three to the service of a fourth in trouble. Kay brings out a photo of Daphne Caruana Galizia, the journalist whose murder is still unsolved. Daphne is her fourth she explains as she invites us to find our own ‘her’. We chant together, calling on our collective power to the service of our cause.

These are my stories you're reading. They are a blend of life lessons, whimsical moments, inspiring snippets and sometimes even some work. Please do have a seat.